Here's my Dad's third interview with AM 970's Frank Morano.
Posted by TommyGioeli at 7:45 PM 3 comments: 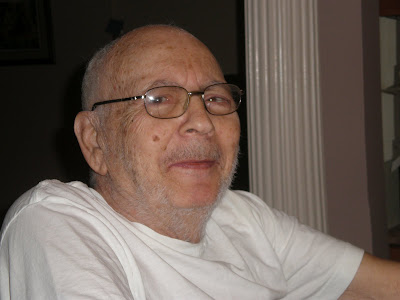 Easter Sunday was my Poppy's first year anniversary in Heaven, what an honor. I know it gave my Grandma and the rest of us a sense of pride. I am sure my Poppy was bragging about his day landing on the holiest day of the year. If you know my Poppy you'd know how special it must have been to him.

This past year flew. It feels as if it has been only a few weeks since Poppy died. I miss him terribly. We live in my Grandparent's house so he was a daily part of our lives and our home feels empty without him and of course without Daddy. I think we all miss Pop more as the days go by, I know I do.

As trial is coming to an end I am filled with excitement to have my Dad back home. I daydream about the day I will see him walk up our front steps and I just can't wait. I dream about just sitting around the table with my family and enjoying each other's company. Poppy making all of us laugh. But then I remember Poppy won't be here and Daddy will come home to a less full household. Our beloved dog of 17 years is now gone too. How I wish so much that my Poppy and my Matty dog could be a part of our reunion with Daddy. They both missed him so much every day. Poppy was only able to see him once and poor Matty just had to have his Dad disappear and not understand why.

The government and the FBI stole my Dad's last few years with his Dad. He should have been here with all of us. Poppy was sick and all he would say was, "I need my son. I need my Tommy." We needed him here, we need him here with us. Poppy would have never suffered the way he did at the end if my Dad was home. He should have been here. Convicted criminals go home and an unconvicted man who has only hearsay against him cannot. For example:

1. Sal Vitale: Lived a life of crime, made millions loan sharking. Was involved in the murders of 11+ people. He is HOME, FREE. He was also allowed to keep $250,000 of his ill-gotten gains, his condo, and his ex-wife was allowed to keep other properties obtained from his lucrative life of crime. He is paid $2300 a month for life by the government and is collecting social security!!!!

2. Reynold Maragni: Arrested in Jan. 2010. Following his arrest the US Attorney's office wrote to the judge not to release him on bail because he was a danger to society. For example, he was caught on tape bragging about how he cripples African Americans for being in his neighborhood. He also threw a man out a third story window and went down and continued to beat him in anger because he "didn't die," etc. Yes, quite a danger to the community I think. WRONG. Before even meeting with this psycho the government wrote a letter to the judge to release Reynold Maragni on bail because he wanted to cooperate with them. He continued to loan shark and commit crimes while working for the government and this violent maniac is HOME, FREE.

3. Dino Calabro: Sat in court and smugly described how he's killed multiple people. He wore a prison uniform (and brand new sneakers and a brand new watch) in front of the public and the jury meanwhile his kids were posting pictures of him all over Facebook at home in plain clothes visiting with them while he was "incarcerated." Dino Calabro is aware of Sal Vitale's deal with the government (and I quote) he "hopes to do one better." That he will.

If these self-professed maniacs can be released out onto the street without the blink of an eye why couldn't my Dad come home on bail? All they have on my Dad is the word of these lunatics but yet he spent the last four years in jail while they were out committing crimes (working for the FBI). My Dad couldn't at least have been on house arrest? My Dad couldn't have at least took 30 minutes to bury Poppy? But a maniac who brutally beats African Americans can run all over New York because he agreed to lie for the government? My Dad is unconvicted! My Dad is not on one tape! My Dad has been followed since the 1980s and there is not one ounce of evidence that he ever committed a crime. The only people who say he's a criminal are the ones who are getting paid to follow the government's script and not serving jail time for their own crimes. These guys are all confessed, convicted criminals and they are home and free. If my Dad decided to lie for the prosecutors and the FBI he'd all of the sudden not be a "danger to the community" too.

The US Attorney's Office and the FBI do not give a shit about you, or me, or public safety at all because they continue to release psychos like Sammy Gravano, Sal Vitale, Reynold Maragni, etc. into our communities without a thought. All they care about is a perfect conviction rate and political gain.

My Dad will make up time lost with Poppy when it's his time and Poppy greets him in Heaven. The FBI's organized crime squad, the devils in the US Attorney's Office and the criminal informants can all go to hell where they belong.